How Many Of These Fantastic Women Do You Know? 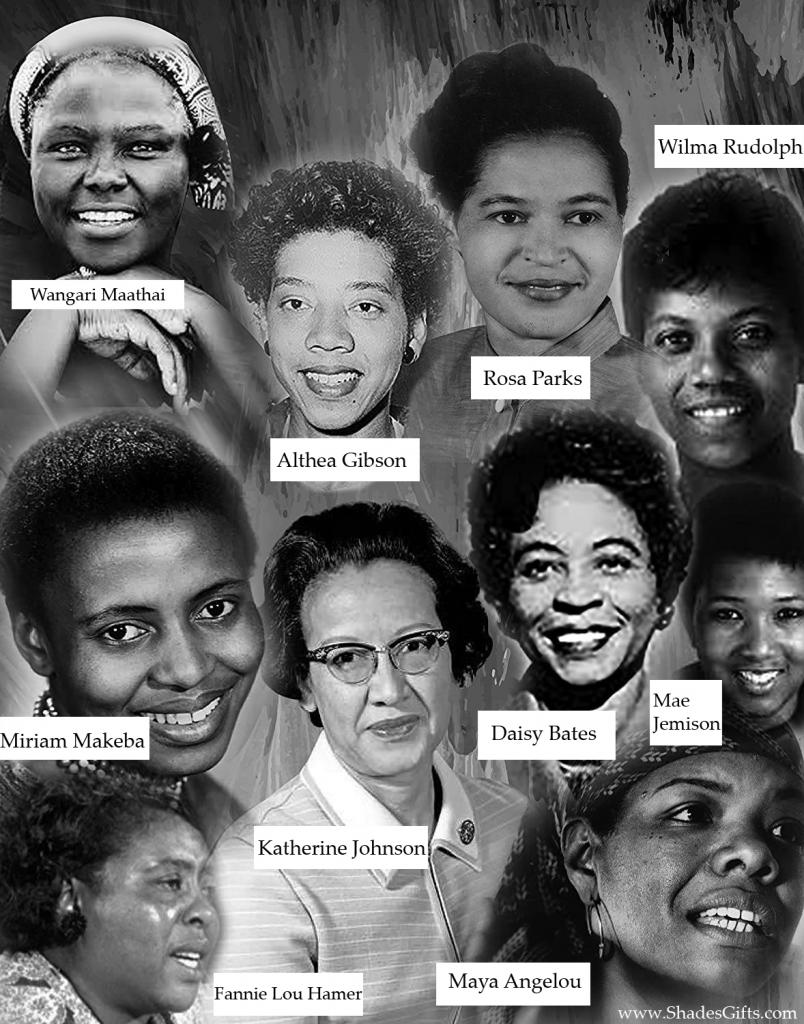 See Below For More Information On Each Trailblazing SHE-ro! Let us continue to raise our sistren and their accomplishments.

Wangarĩ Muta Maathai (1 April 1940 – 25 September 2011) was a Kenyan social, environmental, and political activist and the first African woman to win the Nobel Peace Prize.[1] As a beneficiary of the Kennedy Airlift she studied in the United States, earning a Bachelor’s Degree from Mount St. Scholastica and a Master’s Degree from the University of Pittsburgh. She went on to become the first woman in East and Central Africa to become a Doctor of Philosophy, receiving her Ph.D. from the University of Nairobi in Kenya.

Althea Gibson (August 25, 1927 – September 28, 2003) was a tennis player and professional golfer, and one of the first Black athletes to cross the color line of international tennis. In 1956, she became the first African American to win a Grand Slam title (the French Championships). The following year she won both Wimbledon and the US Nationals (precursor of the US Open), then won both again in 1958 and was voted Female Athlete of the Year by the Associated Press in both years. In all, she won 11 Grand Slam tournaments: five singles titles, five doubles titles, and one mixed doubles title. Gibson was inducted into the International Tennis Hall of Fame and the International Women’s Sports Hall of Fame. In the early 1960s she also became the first Black player to compete on the Women’s Professional Golf Tour.

Rosa Parks (February 4, 1913 – October 24, 2005) was an activist in the civil rights movement best known for her pivotal role in the Montgomery bus boycott. The United States Congress has called her “the first lady of civil rights” and “the mother of the freedom movement”. Her act of defiance and the Montgomery bus boycott became important symbols of the movement. She became an international icon of resistance to racial segregation, and organized and collaborated with civil rights leaders, including Edgar Nixon and Martin Luther King Jr.

Wilma Rudolph (June 23, 1940 – November 12, 1994) was a sprinter born in Saint Bethlehem, TN, who became a world-record-holding Olympic champion and international sports icon in track and field following her successes in the 1956 and 1960 Olympic Games. She competed in the 200-meter dash and won a bronze medal in the 4 × 100-meter relay at the 1956 Summer Olympics at Melbourne, Australia. She also won three gold medals, in the 100- and 200-meter individual events and the 4 x 100-meter relay at the 1960 Summer Olympics in Rome, Italy. Rudolph was acclaimed the fastest woman in the world in the 1960s and became the first American woman to win three gold medals in a single Olympic Games.

Miriam Makeba (4 March 1932 – 9 November 2008) was a South African singer, songwriter, actress, United Nations goodwill ambassador, and civil rights activist. Associated with musical genres including Afropop, jazz, and world music, she was an advocate against apartheid and white-minority government in South Africa. She was among the first African musicians to receive worldwide recognition. Makeba’s career flourished in the United States, and she released several albums and songs, her most popular being “Pata Pata” (1967). Along with Belafonte she received a Grammy Award for her 1965 album An Evening with Belafonte/Makeba. She testified against the South African government at the United Nations and became involved in the civil rights movement. She married Stokely Carmichael, a leader of the Black Panther Party, in 1968.

Katherine Johnson (August 26, 1918 – February 24, 2020) was a mathematician whose calculations of orbital mechanics as a NASA employee were critical to the success of the first and subsequent U.S. crewed spaceflights.[1] During her 33-year career at NASA and its predecessor, she earned a reputation for mastering complex manual calculations and helped pioneer the use of computers to perform the tasks. The space agency noted her “historical role as one of the first African-American women to work as a NASA scientist”.

Daisy Bates (November 11, 1914 – November 4, 1999) was a civil rights activist, publisher, journalist, and lecturer who played a leading role in the Little Rock Integration Crisis of 1957. In 1952, Daisy Bates was elected president of the Arkansas Conference of NAACP branches. The newspaper, The Arkansas State Press, became an avid voice for civil rights even before a nationally recognized movement had emerged, and Daisy was later recognized as co-publisher.

Mae Jemison (born October 17, 1956) is an engineer, physician, and former NASA astronaut. She became the first black woman to travel into space when she served as a mission specialist aboard the Space Shuttle Endeavour. Jemison joined NASA’s astronaut corps in 1987 and was selected to serve for the STS-47 mission, during which she orbited the Earth for nearly eight days on September 12–20, 1992.

Fannie Lou Hamer (October 6, 1917 – March 14, 1977) was a voting and women’s rights activist, community organizer, and a leader in the civil rights movement. She helped and encouraged thousands of African-Americans in Mississippi to become registered voters and helped hundreds of disenfranchised people in her area through her work in programs like the Freedom Farm Cooperative. She unsuccessfully ran for the U.S. Senate in 1964 and the Mississippi State Senate in 1971. In 1970, she led legal action against the government of Sunflower County, Mississippi for continued illegal segregation. She was the co-founder and vice-chair of the Freedom Democratic Party, which she represented at the 1964 Democratic National Convention. Hamer also organized Mississippi’s Freedom Summer along with the Student Nonviolent Coordinating Committee (SNCC). She was also a co-founder of the National Women’s Political Caucus, an organization created to recruit, train, and support women of all races who wish to seek election to government office.

Maya Angelou (April 4, 1928 – May 28, 2014) was a poet, memoirist, and civil rights activist. She published seven autobiographies, three books of essays, several books of poetry, and is credited with a list of plays, movies, and television shows spanning over 50 years. She received dozens of awards and more than 50 honorary degrees. Dr. Angelou is best known for her series of seven autobiographies, which focus on her childhood and early adult experiences. The first, I Know Why the Caged Bird Sings (1969), tells of her life up to the age of 17 and brought her international recognition and acclaim.

You proud of these legendary sisters?? We are too! And guess what, we are proud of YOU too for all that you are and all that you will be!!

For Gifts That Celebrate The Beauty & Inspiration All Year Visit Our Online Store Here.

Sale Through Cyber Monday! Use code 20OFF at checkout to receive 20% off your entire retail order! Plus FREE shipping on retail orders over $100. Dismiss